The National Orientation Agency has stated that the widespread looting of warehouses across the country will have negative effects on the economy.

The federal agency in series of tweets shared on Monday October 26, appealed for calm in the country.

The NOA who urged Nigerians to be patriotic, averred that hurting businesses will traumatize owners with attendant negative effects on nation’s fragile economy.

#EndSARS protesters could not have envisaged looting of this magnitude, an act completely different from genuine agitations/demands of lawful protesters. Hurting businesses will traumatize owners with attendant negative effects on nation’s fragile economy

#COVID19 has affected the world economy beyond imagination of which #Nigeria is no exemption. Economy is in need of a quick restart, and any impediment can slow down economic recovery efforts. Looting businesses is an impediment to an already strained economy.

Quite number of both public and private buildings have been vandalised and looted resulting in loss of unimaginable amount of money.

We sympathise with business owners whose investments have been touched by vandals and looters. 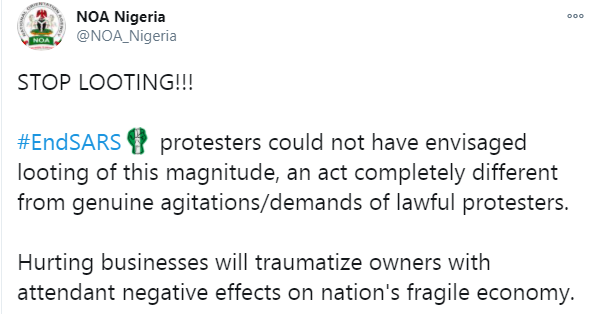