Residents of Dange/Shuni Local Government Area of Sokoto have been thrown into panic and confusion after bandits allegedly sent a threat letter notifying them of impending attacks.

Recall that fleeing bandits, who escaped from military onslaught in Zamfara state, had attacked Tureta Local Government Area of Sokoto on Wednesday, where they killed six and ransacked shops and houses for foodstuffs.

The threat letter written in Hausa language was reportedly found under a tree in Kwanar Kimba village of Shuni on Saturday, September 11.

In the letter, the marauding bandits listed Shuni, Kwanar Kimba, Rikina and Dange as targets of the impending attacks.

The bandits also boasted that no force can stop them from carrying out their planned ******.

“A million army personnel will not stop us from carrying out the ******, which may be carried out any moment from now,” the alleged notice reads.

A senior member of the Nigeria Union of Journalists NUJ, Sokoto state chapter living in one of the communities the bandits promised to ******, said that since the discovery of the letter panic has gripped members of the four communities and their surroundings.

He said all the security agencies have been informed of the development as he asked them to take the threat seriously.

He said the Divisional Police Officer in charge of the area has been informed as well as the head of the Nigeria Security and Civil Defence Corps and other security personnel operating with the area. 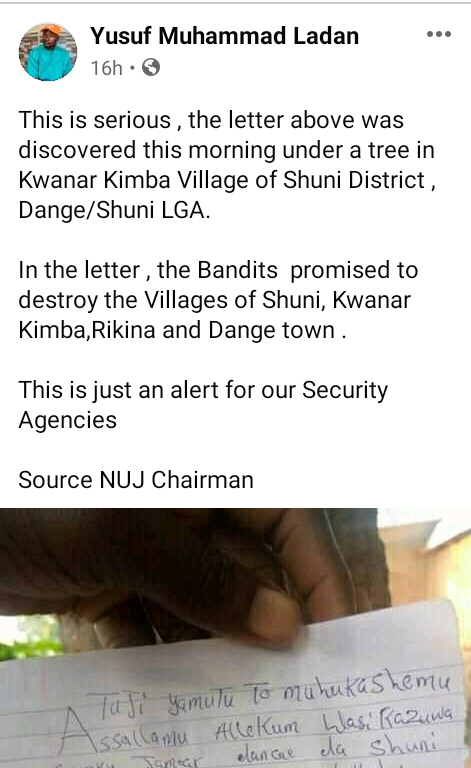