Nine members of the Eiye confraternity who allegedly killed a rival cult member in May 2020, have been arrested by operatives of the Special Anti-Robbery Squad (SARS) of the Lagos State Police Command.

The Inspector General of Police, Mohammed Adamu ordered an investigation and apprehension of the suspects after the recorded murder went viral on social media. They were spotted questioning a young man before shooting him dead.

One of the suspects, Francis Diamond aka Iron Man who was initially arrested by SARS operatives confessed to being a member of the gang and also the one who recorded the chilling video. 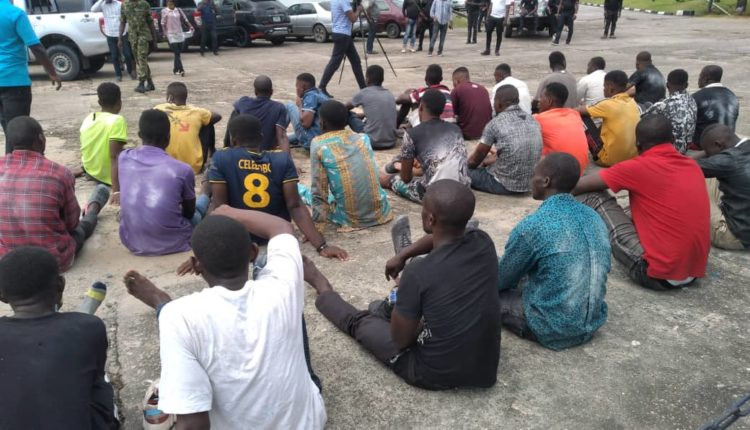 8 members of the gang involved in the murder of their alleged rival have been arrested and they’ve been identified as Olaitan Apanpa aka Emir/Armoured Tank, 31; Chidi Michael aka Jaaru, 25; Eno Sunday aka Covenant, 25; Saheed Gbadebo aka Sambo, 23, Adepeju Azeez aka Aboki, 38; Samuel Ilesanmi aka Baba Obo; Omotosho Quadri, 25; and Moses Ogungbe, 28.

It was also gathered that Apanpa pulled the trigger that killed their victim who they accused of participating in the elimination of one of their leaders at the University of Ibadan in early 2020.

Asides allegedly being serial killers of rival cult members in Ikorodu and its environs, detectives also alleged that Gbadebo single-handedly killed two persons at Bayekun Street, Ikorodu and another five at Ajah.

The suspects will be charged to court at the end of investigations.